Cola Addiction or soft drinks are the favorite beverages of a lot of people. But the problem with these products is that they contain unhealthy amounts of sugar. Sugar is not the only problem with them; another issue with them is that they are highly addictive. And once you get addicted to them, your body has to pay for the consequences.

I have been cola for as far as I can remember. At one point, I was at the stage of addiction. I was drinking cola with my every meal, with every snack, and even as a replacement for water. Therefore, I am the right guy to tell you about how bad Cola Addiction can be for you.

The Beginning of the Problem

For me, the problem began at a young age when cola started to become a part of our every meal. At first, those meals were the feasts cooked for guests with which we used to have a cola. Later on, cola became a part of every meal. The addiction to these fizzy drinks was so bad that food seemed incomplete without cola at one point. In my case, it wasn’t the fruity ones but the caramel-flavored cola.

Back in college and university, the situation worsened so much that I started drinking cola more than plain water. Cola was my first preference for thirst. The tasteless water was way less exciting than my favorite beverage.

Soon I discovered that without the cola, I used to feel down on energy. After drinking a glass or two, I felt much better and in better shape. This is how every addiction works, whether it is of some type of substance or some other thing.

Then after being in this condition for an extended time, I found out about its effects and how they were starting to affect my routine. Following problems took place:

The Feeling of Being Tired Without Getting Cola

The very first thing I experienced with my addiction was that without the cola, I felt tired all the time. After 250 to 500ml of it in my system, I felt much better. That’s why while preparing for exams back in the university. It was my best friend.

Cola has high ratios of sugar and some quantity of caffeine in it. These two, when combined, can result in craving and dependency. So, at that stage, the two aspects of action were these.

At the extreme stage of my addiction, my appetite became less than before. I was only eating properly one time and a small pack of chips or biscuits through the complete course of the day with four to six standard servings of coke per day.

Caffeine has mild diet suppressant qualities, and sugar satisfies hunger. So instead of getting a proper nutritious meal, if you are running on cola, that can ruin your appetite. The body thinks that it is full, but in reality, it lacks nutrition

Another health-related problem I faced was pain during urination. Cola is a bladder irritant, and I didn’t know that before. Even though the pain was not a lot, it was still disturbing in the least.

Tooth problems are also one of the side effects of the continuous use of cola. My teeth became so sensitive that eating Ice cream or drinking coffee became painful. On top of that, eating a bar of chocolate also became difficult.

Later, I discovered the fact that cola and sugar in soft drinks damage the enamel of the teeth. This damage results in toothache and sensitivity on continued exposure to teeth damaging foods.

The sugary syrups used in making soft drinks can make you fat. When I started eating completely, with half of the amounts of coke I actually used to drink, my weight was increasing quickly. In the worst condition, people gain a lot of weight and then have to suffer from it.

Too much of anything is bad for health, especially when it has high contents of sugar in it. That’s what I learned after staying hooked on cola for a long time due to Cola Addiction. 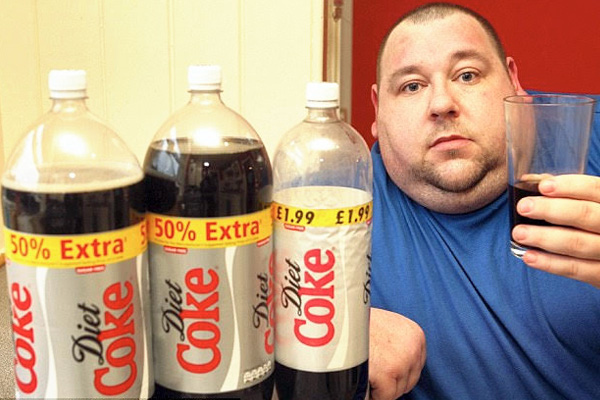 There are many other great things out there that you can eat or drink. Trust me, cola is not worth ruining your health for. Drinking cola every once in a while is okay but developing a habit is not. Do not make it a part of your daily nutrition.